Take a piece of tyrol home with you!

Speck (bacon), smoked sausages, Alpine cheese and schnapps are just as much a part of Tyrol as the impressive mountains with their lush meadows
during the summer and snow-covered slopes during the winter. Produced and matured according to traditional recipes, the Speckeria offers a diverse range of souvenirs and the perfect reminder of Tyrol.

Tyrolean smoked bacon, a special type known as ‘Speck’ in German or “das schwarz G’selchte” in dialect, has had its firm place in indigenous cuisine for centuries. Speck products were known back in the 13th century, although they do not seem to have been mentioned by that name until 500 years thereafter. In those days, it was difficult to cool meat adequately. So because of its slow perishability and high nutritional value, Speck was highly popular. It helped farmers to overcome long hard winters. Depending upon the geographical location, Speck was either cured or smoked to make it last even longer. This led to a variety of traditional recipes and methods that still make it unique today – indeed every single portion. Over the years, Speck became a speciality that was served at celebrations and banquets. Today no Tyrolean ‘Jause’ (a traditional snack) is conceivable without a good piece of Speck.

The speciality board – the fullest diversity of Tyrolean flavour – is served in our Speckeria. You are also more than welcome to taste before buying our products. We look forward to your visit. 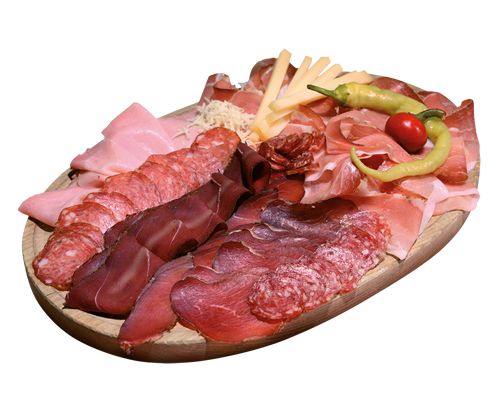 in the Speckeria cloth bag

Our cloth bag offers the perfect storage for your products after they are taken out of their original packaging.

FREE with purchases of € 20 and over

in the Speckeria cloth bag

Our cloth bag offers the perfect storage for your products after they are taken out of their original packaging.

FREE with purchases of € 20 and over